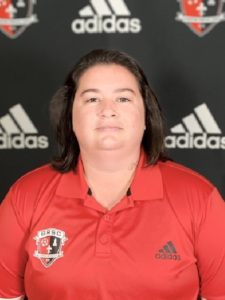 Santana Ruíz was born in Honolulu, Hawaii. Due to her father being in the Army, she spent her childhood traveling across the United States. She has family in California and the southeastern United States. Ruíz attended the University of Alabama – Huntsville, on an academic scholarship. She was Pre Med and graduated with a Bachelor of Science in Biology degree with a double minor in Spanish and Exercise Physiology with tracks in Athletic Training. She returned to California in the summer of 2011 to attend California Baptist University to pursue her masters. In May of 2013, she graduated with a Master of Science degree in Athletic Training. In June of 2013, Ruíz was hired by C.D. Chivas USA as an Athletic Trainer for their U.S. Soccer Federation Development Academy teams. She was the Head Athletic Trainer for Chivas USA’s U-23 team. She traveled with the club to Guadalajara, Mexico, for the Copa Chivas International Tournament. She also worked as the Head Athletic Trainer for the Ontario Fury, a professional men’s indoor soccer team. During the 2015 Special Olympics World Games held in Los Angeles, Ruíz worked as an Athletic Trainer for the tennis matches held at the UCLA Tennis Center. In the spring of 2016, she worked the United States Tennis Association’s Easter Bowl tournament in Indian Wells, CA. In 2017 Ruíz became an independent contractor for the United States Tennis Association. She worked the 2017 Easter Bowl tournament once again, as well as a Pro Circuit event in Little Rock, Arkansas, for the organization. Before joining BRSC, Ruíz worked for the L.A. Salsa organization as the Athletic Trainer for their women’s team that was a part of the Women’s Premier Soccer League.
Ruíz obtained her national board certification as an Athletic Trainer in 2013 and acquired her Louisiana state licensure from the Louisiana State Board of Medical Examiners in 2017.