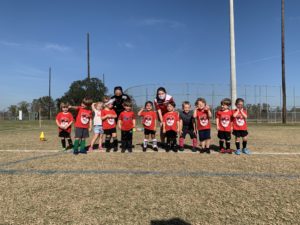 In an effort to provide children with more opportunities for playing experience, BRSC has enhanced the current program with new sessions for younger players and the opportunity to play an additional day each week. Starting in the fall BRSC will hold sessions for players as young as two.

BRSC Mudbugz Director Tracy Phipps views the addition of two-year-olds as a critical component for the club. “The key development phase for motor skills begins at age 2, and research has shown that physical activity plays an important role in the physical, psychosocial, and mental development of a child beginning in infancy,” says Phipps. “At this age, we are introducing the idea of moving and controlling a ball using only our feet.”

Another important component for developing a love for the game is frequent play. To give our youngest players more time on the ball, Phipps added an additional day of play for parents and children who want additional opportunities for play. The eight additional sessions will be for players 2-4 on Tuesday afternoons at Burbank Soccer Park. Two-year-olds will play 4:45 – 5:30 pm, three-year-olds from 5:30 – 6:15 pm, and four-year-olds from 6:15 – 7:00 pm.

“Repetition and practice is the key to developing technique and skill,” explains Phipps. “We’ve created an opportunity for our registered Mudbugz players to add an additional session each week.”

Pre-K recreational players are also invited to participate in the Mudbugz add-on session. The cost of these eight sessions is $120/player. The inclusion of Rec Players was another addition Phipps felt was an important step for the skill development of BRSC’s youngest players.

“Pre-K players no longer have to choose between participating in the BRSC Recreation League and Mudbugz sessions! Mudbugz add-on sessions are the perfect opportunity for Pre-K recreational players to receive technical skills training during a weekly session lead by a professionally-trained, early-childhood coach.”

Phipps is also offering a free Mudbugz clinic on Tuesday, September 7th at Burbank Soccer Complex for parents and kids to experience the program.

“My philosophy for shaping this program is based on the way world-renowned grassroots soccer coach Tom Byers views player development at this age group.”

“Soccer’s a competitive game, but at this age and at this level, we’re not interested in the competitive side of soccer; we’re interested in the potential of individual children to acquire fundamental skills and gain confidence so they are able to eventually participate in games and have a positive experience.”