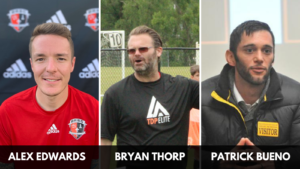 Baton Rouge Soccer Club is thrilled to announce the additions of Alex Edwards and Patrick Bueno to the competitive staff for the upcoming season. Edwards joins BRSC following stints with LA Galaxy OC and Ascension Flight Soccer Club. Bueno is a returning coach who served as the Adult League Director and staff coach for BRSC from 2013 through 2016.

In addition to Bueno and Edwards, BRSC is also adding Bryan Thorp to the club’s full-time staff. Thorp will serve as the director of the new LATDP Elite program, a collaborative organization between BRSC, Lafayette Dynamo, and LA Fire SC.

“The additions of three high-caliber coaches to our club will have significant impacts that impact numerous levels throughout our organization,” said BRSC Competitive Director Marvin Smith. “Our emphasis has always been focused on player development and each of these coaches has an impressive track record in that arena.”

For the past ten years, Alex Edwards has used his driven, forward-thinking approach to help maximize player development. He currently holds a UEFA B License as well as a multitude of other certifications that help make his players succeed on and off the pitch. Edwards is currently serving as an assistant coach with BRSC United and will coach U12 Girls Red, U13 Girls Red, U15 Boys Black, and LATDP Elite as well as serve as Assistant Tournament Director this upcoming season. Since his arrival, Edwards has hit the ground running. “It is a fantastic opportunity to be part of BRSC, a club at the forefront of raising standards and levels of play in Louisiana and beyond. I’m excited to be working with such an experienced group of professional staff to further my knowledge, be challenged as a coach, and help our players grow through many of their learning experiences.”

Patrick Bueno returns to BRSC after a five-year absence from the club. His previous experience as a college assistant coach, high school head coach and author of the player development curriculum for Valor United FC in Kentucky provides Patrick with a unique ability to connect with players of all ages. “I am extremely excited to be working with BRSC again,” said Bueno. “To be a part of something like this is special in itself, and I know I’m in the perfect place to continue to grow as a coach.”

The most recent addition to the BRSC staff is Bryan Thorp. Thorp previously served as the Technical Director of Coaching Education and Player Development for Louisiana Soccer Association. As the Director of LATDP Elite, he will oversee the entire program and coach the LATDP Elite 2009 and 2005 boys as well as serve as the assistant coach for the 2006 and 2004/03 boys. Thorp’s extensive experience with producing professional-level players makes him a natural choice to lead the new program. “I want to thank Louie and Marvin for the opportunity,” said Thorp. “I am excited to get involved with the BRSC soccer community and be part of the TDP Elite programming.”