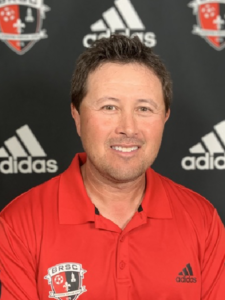 Coach Andy grew up in Phoenix, AZ. He played club and high school soccer while residing there. Andy previously coached for clubs in Phoenix and New Orleans. He was a staff coach for Carrollton Soccer Association and Chicago Fire Juniors Soccer Club for ten years.

Andy also spent the last twelve years as a Physical Education teacher and coach at Trinity Episcopal School. While there, he guided the soccer teams to numerous league championships and runner-up titles. In addition to his other duties, Andy was also the coach and instructor for the summer soccer camps. His collegiate career includes stints at Glendale Community College and Francis Marion University. He completed his education with a Bachelor’s degree in Health Education & Promotion from Northern Arizona University. Post-college, Coach Andy played in the PDL and USISL leagues for the Arizona Cotton, Phoenix Hearts, and the Arizona Saguaros.