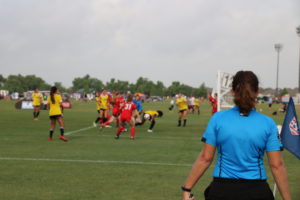 The 133rd AGM of The International FA Board (The IFAB) in Aberdeen, Scotland on March 2, 2019 approved a number of amendments to, and clarifications of, the Laws of the Game for 2019/20.

Three changes were approved following 2 years of worldwide experiments:
• The introduction of yellow and red cards for misconduct by team officials
• A player being substituted leaving the field at the nearest point on the boundary line
• At a goal kick and a free kick for the defending team in their own penalty area, the ball is in play as soon the kick is taken (it can be played before it leaves the penalty area)

Learn more about other law changes: New Laws of the Game at a Glance