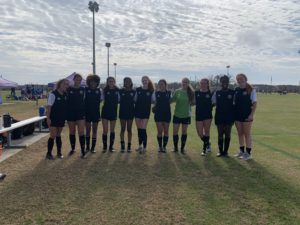 While the weather was a cool 73° in the mid-December Gulf States College Showcase in Foley, AL, the Louisiana Dynamo/Dah 02/03 Girls were red hot. The team was comprised of elite players from Louisiana Dynamo, LA Fire, and Baton Rouge Soccer Club. Players were selected for the team following an intense series of tryouts at Burbank Soccer Complex.
In three matches at the Gulf States College Showcase, the Louisiana Dynamo/Dash 02/03 girls held three opponents scoreless and never scored fewer than six goals in a contest. The team girls their first game 6-0 against Dothan Shockers FC and followed it up with a 7-0 victory against Southern States Soccer. The final match finished much like the previous two games with a 6-0 against Perdido Bay FC.

Plans for the 2021 Spring TDP Program are currently in development, and tryout dates will be available soon.