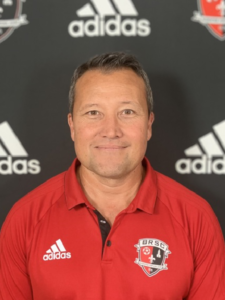 Louie Smothermon came to BRSC on February 1st, 2017, from New Orleans, Louisiana. Louie grew up in Phoenix, Arizona, and was a two-time all-state player at Greenway High School. He went on to Lander University and received his bachelor’s degree in Exercise Science. At Lander, Louie was a two-time All-American, Palmetto State Conference Player of the Year, District 6 Player of the Year, and Lander Athlete of the Year. Louie received his Master’s Degree in Sport Management from East Tennessee State University where he was a Graduate Assistant of the Year. Louie played professional indoor soccer for the Arizona Sandsharks. He played professional outdoor soccer for the South Carolina Shamrocks, New Orleans Gamblers, and was a player/assistant coach for the New Orleans Storm. Louie coached at Brother Martin High School in New Orleans for nine years with the last two as the Director of Soccer. Louie was the Director of Coaching for the Carrollton Soccer Association (CSA) in New Orleans for ten years and was instrumental in merging four Clubs in New Orleans, forming the Chicago Fire Juniors Soccer Club. Louie has been directly involved in teams that have won the Region 3 championships and qualified and participated in the U.S. Youth Soccer National League. He has helped develop many players who have gone on to play high school, region team, collegiate level, and in National Team pools. Louie has been on the LSA Olympic Development and U.S. Youth Soccer Region III staff.

Louie currently holds his USSF “A” license, NSCAA Premier Diploma, USSF “Y” License, and is a certified Life Kinetik trainer. Louie is proud to have two kids, Madelyn and Max.