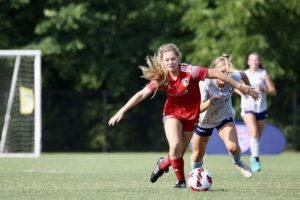 Two teams from Baton Rouge Soccer Club are seeking national championships at next week’s US Youth Soccer National Championships. BRSC 03/04 Girls Black and BRSC 04 Boys Black are heading to The Wide World of Sports Complex in Orlando, Florida to play some of the best teams in the nation for a shot at a national title.

Each team will begin bracket play on Tuesday afternoon. The winners of each four-team bracket will advance to the semifinals on Saturday, July 23 followed by a championship match on Sunday.

The finals are a culmination of a year-long series of competitions at the state and regional levels known as the US Youth Soccer National Championship Series which provides approximately 185,000 players on 10,000 teams from US Youth Soccer’s 54 State Associations the opportunity to showcase their soccer skills against the best competition in the nation.

The BRSC 03/04 Girls Black earned their spot after winning the U19 USYS Southern Regionals Championship June 24 – 29 in Murfreesboro, TN. The path to the regional championship showcased a dominant defensive effort in which the girls held their opponents scoreless in four of five matches. Their only loss was a one-goal defeat in group play, a 2-1 loss versus North Carolina FC United.

“I thought we were fantastic defensively,” said Head Coach Roger Charcap. “We only gave up two goals all week.” Coach Charcap was also pleased with the offensive output he saw from his team. “ We were well balanced offensively scoring eleven goals from seven different players.”

As they head into the national championship he expects a strong performance from his squad. “I expect us to compete in every game for ninety minutes. We have a good team. We’ll be a tough out for anyone!”

The BRSC 04 Boys Black had a more unusual path to the U18 National Championship. Following a 1-0 defeat to the eventual USYS Southern Regional Champions, Miami Juventus, in the semifinals, the team thought their season had come to end. It was later discovered that Miami Juventus was using ineligible players. Since the runners-up had qualified for Nationals, this paved the way for the 04 Boys to advance to the championship series.

Since both teams have large portions of their roster moving on to college next season, the chance to finish out their club careers playing alongside friends they’ve shared the same field with as young kids is incredibly important to the players.

Buster Couhig of BRSC 04 Boys Black was enjoying the offseason with his family overseas when he received the news. “I woke up and heard the news. It was the best start to a morning I’ve ever had, that’s for sure. I’m excited for my teammates and glad that we have another final opportunity to play together again.”

Baton Rouge Soccer Club is a non-profit organization whose mission is to provide quality soccer opportunities to the greater Baton Rouge area. As the largest non-profit soccer club in Louisiana and one of the largest in the southeastern region, we strive to set the standard soccer programming and customer service for our members. With more than 7,000 members, we are a full-service club with soccer programming which provides excellent learning and character-building experiences for youth and has a broad impact on the area’s economy.