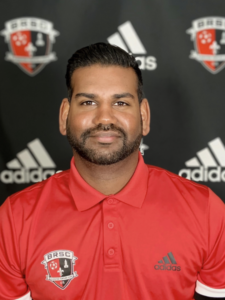 Coach Kiran Booluck is originally from London, England. He graduated from Southampton Solent University with a bachelors of honors degree in Football (soccer) Studies. He then moved to the USA, working for Challengers Sports. He worked in the northern states before moving to Dallas, Texas. From there, he eventually moved to Shreveport, LA. In Shreveport, he worked for CABOSA/Shreveport United for 3 Years and was the head coach for older teams along with heading up the girls academy program. In July 2015, Coach Kiran moved to Baton Rouge. Since then, he has been the head coach for multiple BRSC Competitive Teams along with being a head coach for numerous ODP Louisiana Teams. Coach Kiran Currently coaches the 2003 Boys Black and 2004 Boys Black Competitive team along with being the Head Boys Soccer Coach at Episcopal High School of Baton Rouge.

Coach Kiran has a UEFA B license, USSF B License, NSCAA Licenses, and certifications, including his Director of Coaching Diploma, Advance National Youth, and Goalkeeping qualifications.