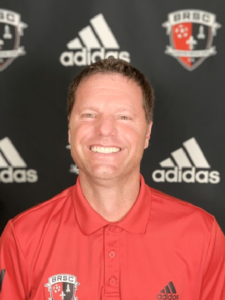 Chris Mitchell returned to BRSC on May 15th, 2017, from a seven-year stint as the Director of Capital City United Soccer Club. Chris grew up in Baton Rouge playing for BRSA and Baton Rouge High. A member of the Baton Rouge Soccer Associations inaugural select soccer program called United and Jaguars from 1982 – 1989. Team captain, district MVP, All-Metro Star of Stars, District MVP in HS. He went on to receive a scholarship to play soccer at Butler University and received a BS in Marketing. At Butler, he was a four-year letterman and selected to the All-State Collegiate soccer team in 1990. Chris played semi-professionally with the Seattle Sounders(1993) and Arkansas A’s(1994). He returned to Baton Rouge in 1998 and began coaching at BRHS (1998-2001) and with the BR Jaguars. In 1998, Chris became the Premier Soccer Director for BRSA. He ran the BRSC Premier Program from 1998 – 2010. During that time, he became head coach for University High(2001-present) and has lead them to 17 straight quarterfinal berths and two state title runner up appearances in 2009 & 2010.

Coach Mitchell currently holds his USSF “A” coaching license. Chris is married to Angie Mitchell, and they both have two girls: Sophia (07) and Savannah Mitchell (09).