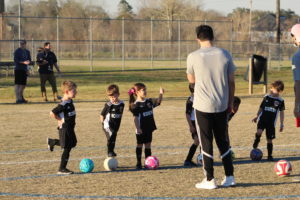 BRSC Academy is a developmental program that focuses on player growth, not winning games. Unlike recreational soccer, players are not on a team. Instead, we group players in pools based on age and skill level. This player movement allows our Academy coaches the ability to switch players around to put them in groups best suited to their ability. It also provides coaches with the ability to challenge players based on the goals of the session.

Players train three days a week for 11 – 12 weeks under the instruction of professional BRSC coaches. All coaches follow the Academy Pathway and approved curriculum. Our coaches adhere to a strict coaching paradigm created so that every child, regardless of ability, is facing an appropriate level of challenge.

Each season’s training format will begin with three weeks of training in technical stations, followed by three weeks of a whole-part-whole method, four weeks of Academy Session, and two weeks of “let them play” SSGs.

BRSC bases its Academy system on those of professional club soccer systems seen around the world. Since the focus is on development, players are free to experiment without the fear of losing a game. This freedom encourages kids to be creative, take risks, and become more proficient with the ball. This approach helps create quick-thinking, confident players who will be better prepared to transition to competitive play.

Instead of games against other teams, the Academy staff divide players in the program into free-flowing groups to play Intra-Squad Games (ISG). ISGs are small-sided games held once a week. The small-sided games allow our staff the ability to manipulate the number of players, size of the field, and conditions/restrictions of the games to highlight the Principles of Play that we want to focus on at that time.

BRSC Academy is available at Burbank for boys and girls aged 5 – 16. The Zachary Academy is open to players 8 – 14. The spring 2020 season will begin on February 10th and conclude on April 30th.

Contact Academy Director Andy Smothermon with any questions you may have about the Academy program. Families interested in registering players for the upcoming season can do so using the following links.