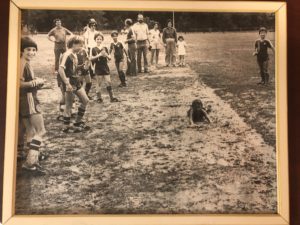 This week we take a look back at this photo from 1978 and one of the players who would go on to help build Baton Rouge Soccer Club into the club it is today.

This photograph is of the Cosmos soccer team during the 1978-1979 season at Independence Park. The Cosmos were affiliated with St. Thomas More and were one of three teams in the Baton Rouge Soccer Club at the time.

Cal Madere, as seen on the far right of the photo, recalls what it was like as a kid starting in Baton Rouge Soccer Club. “We all just wanted to be Pele. At the time, he was playing for the New York Cosmos, which was equivalent to David Beckham playing for the LA Galaxy a few years back.”

Cal would continue to play soccer for nine years until he reached high school. At the time, Catholic High School only allowed students to play one sport. While the decision was tough, Cal ultimately decided to play football. His love for soccer never waned, and in 2006, Cal returned to the Baton Rouge Soccer Club as one of the first ten members on the new member board.

Club soccer had recently started, and the board’s main goal was to shift the league over to mirror what the east coast soccer leagues were doing at the time. The board created a master plan to elevate the club by creating a 3-tier system. Over the years, Cal was able to witness soccer grow from a shadow sport to a mainstream choice. Not only did he watch the club levels grow, but the high school level evolved as well.

When Cal became a member of the Baton Rouge Soccer Club, the league only had six fields at Independence Park. Out of the 6, only 3 of them had lights. With 20 teams interchanging between only three fields for practice, he recalls how chaotic it would get. Because of this, the team relocated to Burbank. During his time of involvement, Cal was a part of the building of the Burbank field. From raising the money to fund the field, hiring and recruiting talented coaches to coach the teams, and lighting up the fields for afternoon practices, Cal was a part of it all. By the time Cal stepped down in 2016, he had witnessed 15 out of the 24 fields have lights installed.

Cal has been an integral component of the organization and innovation of the Baton Rouge Soccer Club. Thank you for all of your hard work and dedication!