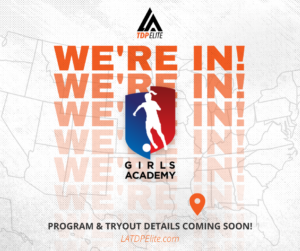 (3/31/22) -Louisiana Talent Development Program Elite (LATDP Elite) will join the Girls Academy (GA) for the upcoming 2022/23 season. Similar to the LATDP Elite boys program, the LATDP Elite Girls program will bring together elite talent from around the region to form teams in the U13, U14, U15, U16, U17, and U19 age groups.

The Girls Academy is the leading youth development platform for the best female soccer players in the United States. League play begins in August and culminates with the playoffs and national finals events in June and July. Additionally, qualifying teams compete in a separate, aspirational platform created to add additional quality competition for the most competitive clubs in the GA.

“We’re excited to add LATDP Elite to the Girls Academy,” said GA Commissioner Lesle Gallimore. “There is a player pool in Louisiana that has earned the opportunity to begin a top national platform and we know their leadership understands the commitment, challenge, and standards required for the successful development of players.”

LA TDP Elite is a collaboration and partnership among LA Fire, Baton Rouge Soccer Club, and Lafayette Dynamo Juniors in affiliation with the Houston Dynamo Academy. The purpose of LATDP Elite is to provide players from the member clubs and players in the region access exposure to the highest level of play in North America. Each team will train under the direction of high-level coaches to compete against the best teams and players in the country.

In the 2021/22 season, club teams and players from BRSC, LA Fire, Lafayette Dynamo, and players statewide competed in the Development Player League (DPL) in an effort to prove Louisiana’s ability to compete at higher levels of play. In the DPL’s February club rankings, LATDP Elite ranked third in the nation due to the success of all teams in league play and the #DPLFL22 Showcase.

Joining Booluck’s staff as Assistant GA Director is Bobby Velasquez. Valesquez currently serves as the Director of Coaching for Girls and a staff coach for the Louisiana Fire Soccer Club. He also leads the club as Academy Technical Director.  In addition, Velasquez also serves as Director of Soccer at St. Martin’s Episcopal School.

His club teams have won numerous local, state, and regional championships. Velasquez has earned licenses with the Louisiana Soccer Association (LSA), as well as with the United States Soccer Federation (USSF) and the National Federation of High Schools (NFHS).

“Bobby brings a wealth of soccer expertise,” said Hubie Collins, Executive Director of Coaching for the Louisiana Fire Soccer Club. “Coach Bobby is especially skilled at developing his athletes into good students of the game through targeted, age-appropriate practice sessions.”

Additional details about the Girls Academy program, staff, and tryouts will be available on latdpelite.com