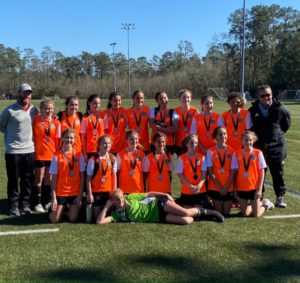 The 08/09G TDP included players from the Louisiana Dynamo and Baton Rouge Soccer Club. The first match of the tournament was against a tenacious Lonestar team. The girls fought hard but would fall to the Lonestars 3-0. After getting a taste for the tough competition, the LA Dynamo/Dash 08/09G would come back to win game two by a score of 2-1 and post a 3-0 shutout in match number three.

The back-to-back victories would send the LA Dynamo/Dash girls to the championship game versus the Lonestar team the girls had lost to in the first match. The game was highly competitive and finished tied at one at the end of regulation. The Lonestars eventually would go on to edge out the finals win on penalty kicks. Despite the disappointing finish, coaches Louie Smothermon and Chris Mitchell were pleased with the team’s growth from game one to the finals. “It was an incredible final, and the girls showed tremendous improvement over the weekend,” said Smothermon.