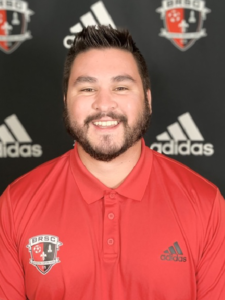 Kevin Hoeprich began his career with Baton Rouge Soccer as an intern in August of 2018. Due to his tireless work, Hoeprich joined the full-time BRSC staff. He currently serves as the Central Campus Director and Office Administrator. In addition to his in-office roles, Hoeprich serves as a coach for competitive and Academy programs.
Hoeprich is a native of San Diego and played 11 years of competitive soccer with Carlsbad Lightning (now known as LA Galaxy San Diego) and San Diego Surf. In 2015 Hoeprich moved to Baton Rouge to attend LSU. He played two seasons with LSU Men’s Club Soccer and is currently on track to graduate in the fall with a degree in Sports Administration. Hoeprich holds a USSF Grassroots Coaching License.