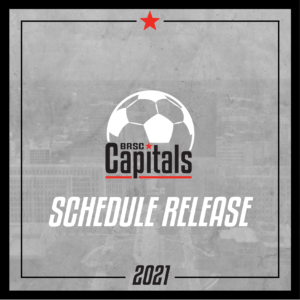 The BRSC Capitals will open the ten-game season at home on May 15th versus New Orleans United at 7:15 pm at Olympia Stadium. The BRSC Capitals will start with the first three games at home before hitting the road for consecutive weeks. The final home game will take place on July 3rd versus Gulf Coast Rangers and conclude the season on the road with a rematch against New Orleans United on July 9th.

The East Conference will feature nine clubs; BRSC Capitals, Crescent City FC, Gaffa FC, Gulf Coast Rangers, Gulf Coast United, Mobile United, New Orleans United, Northshore United, and Pensacola FC and will play a 10 game schedule. To accommodate the club’s eligibility to participate in the US Open Cup qualifying rounds, the league looked for a creative solution that would offer the minimum games required along with keeping travel respectable during the late stages of quarantine. The East Conference will use a points per game system to determine playoff placement.